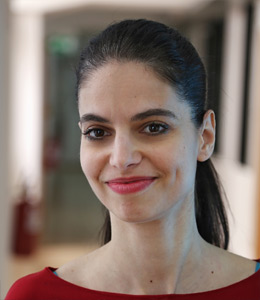 Giorgia is overactive and she never steps back. We are facing a hard worker, precise and rigorous, but at the same time shining andcharismatic. Even if busy she will always find the time for everyone in case of necessity and she is always ready to get involved with new challenges and new opportunities.

Giorgia Lodi is currently a research assistant at Institute of Cognitive Science and Technologies (ISTC) of the National Council of Research (CNR) – Semantic Technology Laboratory (STLab) and a consultant at “Agenzia per l’Italia Digitale” – AgID.. She works in such areas as open government data, Linked Open Data, Semantic Web Technologies, Distributed Systems, Big Data and smart communities.
In the recent past (2011-2014), she worked at AgID in the contest of the Public Connectivity and Cooperation System (SPC) in such topics as open data, e-government, government cloud and smart cities/communities. In particular, in that context she was also a member of the technical working group on Open Data of the G8  and a member of the W3C-EU Commission working group for the definition of the Core Public Service Ontology.
From 2008-2011, she was a post-doc researcher of CINI at Dipartimento di Ingegneria Informatica Automatica e Gestionale “Antonio Ruberti” of Sapienza University of Rome.
She received the Ph.D. degree in Computer Science from the University of Bologna (Italy) in 2006. She served as a reviewer for international conferences (e.g., DSN, SRDS, ICDCS, OPODIS, SAC, DOA, CLOSER, etc.) and international journals (e.g., IEEE Transaction on Software Engineering, IEEE Transaction on Parallel and Distributed Systems, IEEE Transaction on Multimedia, MTAP, etc.). She served as a reviewer for the European Commission.