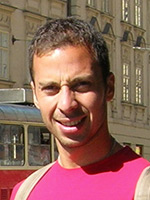 Sergio is a hard worker, methodic, precise, always ready to put to the test himself! He always has a big smile and with his genuine attitude, he manages to bring a wave of joy wherever he goes.
He is a exceptional colleague and an amazing father

From June 2015 to December 2015 Sergio worked as a Computer Engineering Officer within the technical support services team of the Italian Presidency of the Council of Ministers, Palazzo Chigi, Rome. From September 2013 until May 2015, he was a Junior Researcher within the Semantic Technology Laboratory (STLab) of the Institute of Cognitive Sciences and Technologies (ISTC) at the National Research Council of Italy (CNR). He worked under the supervision of Dr. Valentina Presutti on the design and development of algorithms for knowledge pattern extraction from heterogeneous sources and on definition of methods and metrics for their validation. From September 2011 to September 2013 he was a postdoctoral researcher at the European Commission Joint Research Centre (JRC) in Ispra (Italy), working on the evaluation and development of crisis management system software within the Crisis Monitoring and Response Technologies Action, Global Security and Crisis Management Unit, at the Institute for the Protection and Security of the Citizen.

Sergio’s education and scientific experience fall in the areas of Data Science, Operational Research, Artificial Intelligence, Knowledge Engineering, Machine Learning, Crisis and Disasters Management. He has a M.Sc. degree in Computer Engineering from University of Catania (Sicily, 2005) and a Ph.D. in Operational Research from Brunel University (London, 2008), where he was a EU Marie Curie fellow on the project NET-ACE: Network Theory & Applications to Computing and Engineering. During his Ph.D. he has been a visitor researcher for four months at the Universidad de La Laguna (Tenerife, 2006), and for ten months at the Intelligent Algorithms Cluster at Philips Research (Eindhoven, 2007-08). He was also involved in the Centre for the Analysis of Risk and Optimization Modeling Applications (CARISMA), a research of excellence recognized for its research and scholarship in the analysis of risk, optimization modeling, and the combined paradigm of risk and return quantification. After his Ph.D. experience, Sergio also worked for two years as external consultant for the Isab refinery, the largest oil refinery in the Mediterranean area.

Sergio is author of several research publications in peer-reviewed international journals, edited books, and leading conferences in the fields of his work.