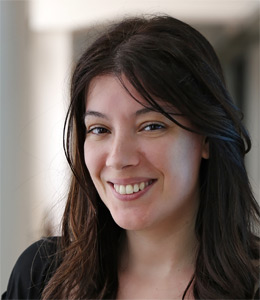 Valentina is the soul of the laboratory, a force of nature, a volcano of ideas!
She is an excellent researcher, passionate and innovative; she finds a solution for every problem.
She is very determined and resolute but she is always open to confrontation.

Valentina Presutti is a Senior Assistant Professor at University of Bologna. She is also an Associate Researcher at the Institute of Cognitive Science and Technologies of CNR and coordinator of STLab. She received her Ph.D in Computer Science at University of Bologna (2006). Her research interests include AI, Semantic Web and Linked Data, Knowledge Extraction, Empirical Semantics, Social Robotics, Ontology and Knowledge Engineering. She coordinates the EUH2020 project Polifonia (2021-2024). She was responsible for several national and EU projects (e.g. MARIO, IKS, ArCo). During her post-doc she worked in NeOn and created ontologydesignpatterns.org and the series WOP, reference resources for semantic web researchers. She has +150 articles in international journals/conferences/workshops. She is editorial board member of J. of Web Semantics (Elsevier), Data Intelligence (MIT Press), JASIST (Wiley), Intelligenza Artificiale (IOS Press), and of “Semantic Web Studies” (IOS Press). She is co-director of International Semantic Web Research Summer School (ISWS) and has served in organisational and scientific roles for several events.

Development and Evolution of Ontologies in Networked Organizations